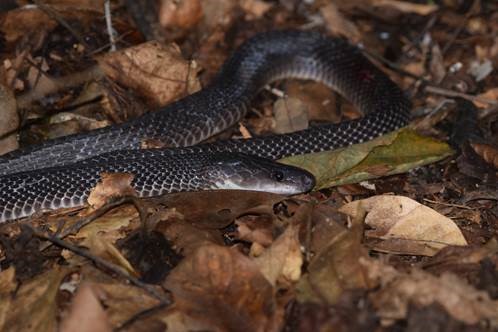 One of the vast benefits of the IITA forest reserve is the diversity of creatures the forest supports and protects from poaching and extinction. The IITA Forest Center carries out biodiversity monitoring, tree propagation, and other environmental protection activities. The Forest Center staff observe and record plant phenology and animals during occasional walks and regular scientific data collection.

During one of the recent biodiversity conservation walks, Field Supervisor Ademola Ajayi spotted an African House Snake (Boaedon fuliginosus). This snake is non-venomous and harmless to humans. It has aglyphus teeth—simple round, uniform teeth that are solid and have no grooves or specialized venom-injecting fangs.

The African House Snake is widely distributed across sub-Saharan Africa, exploiting different habitats, including gardens, forests, scrubland, woodland, savanna, and montane regions. The snake is widely kept and bred as a pet by reptile and amphibian lovers because of its small size, placid demeanor, and preference for rodents, small lizards, and birds. The African House Snake is sexually dimorphic, meaning males and females can be distinctly differentiated.

Snake bites are well-known occupational hazards among farmers, field workers, and home gardeners. While there are about 3,000 snake species worldwide, only 15% are considered dangerous to humans. Most snakes only try to bite when they are cornered or frightened. They are generally more scared of humans than humans are of them.